The article presents case study of the treatment of the superficial flexor tendon in a horse by high power laser therapy unit Polaris HP.

The orthopaedic examination of the horse showed large oedema in the left thoracic limb covering the area on the palmar side, from the carpal joint to the pastern area. Oedema was so large that the outline of flexors and the interosseous muscle was invisible. Additionally, there was the dorsal dislocation of the distal epiphysis of the fetlock bone. Radiological diagnostics showed the subluxation of the pastern joint and the fracture of the second metacarpal bone in 1/3 of the distal part. Standing at rest, the mare relieved the limb by leaving it moved under the torso and burdening the front of the hoof only. The examination in motion showed heavy support lameness, as visible at a walk; the examination at a trot was not carried out. The ultrasound examination presented the injury to the tendon of the flexor digitorum superficialis covering metacarpal areas A and B. Injury type: scattered; injury class according to Genovese: 1; the injury magnitude was 80%.

The horse had a plaster put in order to stabilise the subluxated pastern joint for four weeks. Besides, the horse underwent the treatment with nonsteroidal anti-inflammatory drugs for seven days. The horse had movement limited completely, remaining in a stall 24 hours a day. The high power laser therapy was introduced two months after the injury.

High power laser therapy was taken up to eliminate large oedema, reduce the inflammation of the tissues on the palmar side of the metacarpus in the left thoracic limb and speed up repair processes in the injured tendon. The procedure was carried out using the Polaris HP high power laser therapy equipment made by Polish company Astar.

The high power laser therapy brought about satisfactory effects just after eight sessions. The reduction of oedema on the metacarpus and decrease of the skin surface temperature were observed. After the laser therapy ended, the follow-up ultrasound examination was performed which showed the reduction of the thickness in the tendon of the flexor digitorum superficialis, formation of new collagen fibres and their regular arrangement.

Within the next month after the laser therapy sessions ended, oedema and inflammation subsided completely. The skin surface temperature did not differ from the physiological standard. The mare burdens both thoracic limbs equally.

After two months, the mare was shod orthopaedically to inhibit the deformation of the hoof walls. Motor rehabilitation of the mare started. Initially, the horse was walked for 2 minutes a day. Now, the mare walks twice a day for 15 minutes. Lameness is unnoticeable at a walk.

Due to the subluxation of the pastern joint in the left thoracic limb, the mare will never enter races again. However, owing to the mare’s very good pedigree and great sports results, the mare has been designated as a mother.

Fig. 7: High power laser therapy: photos taken before and right after the series of the sessions. Visible reduction of the oedema in the affected limb.

Fig. 8: High power laser therapy: photos taken before and right after the series of the sessions. Visible reduction of the oedema in the affected limb. 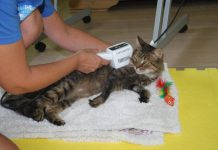 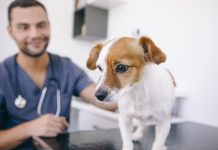 High power laser therapy in the treatment of the superficial flexor tendon in a horse: second case study